Assheton Bowmen was founded by the late David Frost in 1992 with the aim of promoting archery in all its forms. Sadly David passed away in 1997, but his fantastic work has been carried on by our Committee and Members up to the present day.

The clubhouse is well equipped with a 12 lane 18-metre indoor shooting range and disabled access including a disabled toilet. There are two other toilets for the gents and ladies. On the social side, we have a large seated lounge area with a fully featured kitchen, including toaster, oven, fridge and sinks.

Our field is large enough to allow shooting of up to 100 yards.

Fully fenced off, our grounds are secure and members have access 24 hours a day, seven days a week. There is ample parking space all around the clubhouse.

Our members have use of the club 24 hours a day. To be able to access the club when no other members are on site will require a key and access codes for the building’s alarm.

New members: To be considered for a key and alarm codes, new members first need 20 visits to the club on club nights.

Returning member after 18 months: If the member has been away from the club for more than 18 months, they will be classed as a new member and have to start the 20 visit cycle again. This is in line with Archery GB’s rule on the discount of fee’s for new members.
The 18 month period is for time away from our club regardless of their continued membership of archery GB.

Our Patron, Lord Clitheroe, is Richard Assheton, a direct descendant of the original Black Knight.

On 22nd August, 1513, James the Fourth, King of Scotland,crossed the border at Coldstream with an army of over 50,000 men and a powerful train of cannon. With Henry VIII campaigning in France, Richard Assheton, Manorial Lord of Middleton, was commanded to raise a contingent and march to Hornby Castle in North Lancashire to rendezvous with Sir William Molyneux and from there take their place in the Division commanded by Sir Edward Stanley.

The English Commander-in-Chief, the Earl of Surrey, with his army of 26,000 men prepared to move forward to engage the Scots who had moved their position to Flodden Edge, about five miles south of the border.

Although badly outnumbered, the English finally engaged the Scots on the 9th September just North of Flodden at Branxton. Angered by English cannon fire, the Scots left their commanding high ground position to charge down onto the opposing force leaving behind a highland division in reserve. It was this division that was to be the target for Stanley and Assheton. 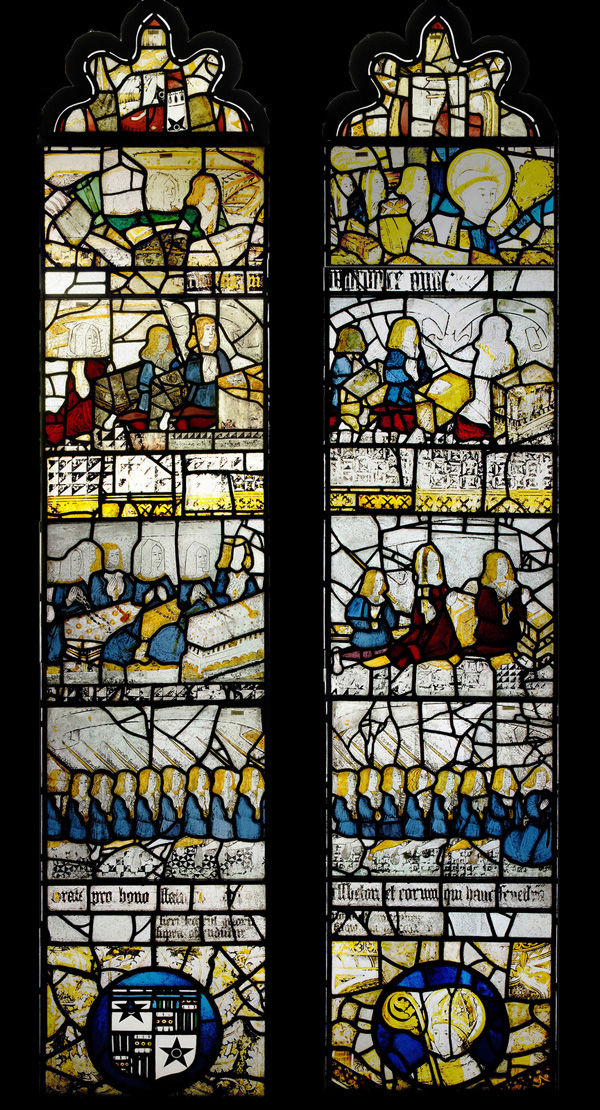 Through rain and mud, the English began to climb Pace Hill, staying well to the left of the Highlanders to avoid detection, they clambered up the slippery ground. The archers from Middleton, Hopwood and Langley took off their shoes to get a better grip in the mud. Stanley had directed some of his troops to gain the attention of the Scots whilst Assheton and his bowmen continued to climb.

Finally reaching the top, they loosed a volley of arrows, through the rain, at the Highlanders, who were totally unprepared for the attack. Casualties were heavy and the Scots withdrew in confusion leaving Richard Assheton and his archers holding the high ground.

Stanley and his men moved down the hill to where the main battle was taking place, effectively trapping James’ army between the main English forces. James and his Household Knights were killed almost to a man. When King James’ body was found, amongst his many wounds, was one, caused by an arrow that had hit him in the head. Richard Assheton was knighted on the field of battle in recognition of his valour and the contribution of his Middleton Archers.

Returning home, Sir Richard Assheton gave thanks at St. Leonards Parish Church and in it, hung his battle armour as well as the sword of Sir William Foreman, an important Scottish Knight he had captured. Shortly after, Sir Richard rebuilt much of the church and installed the magnificent Flodden Window depicting 17 archers along with their names. The Flodden Window, in the sanctuary, is thought to be the oldest war memorial in the UK and is still on view to this day, along with other relics brought back from the Battle of Flodden.